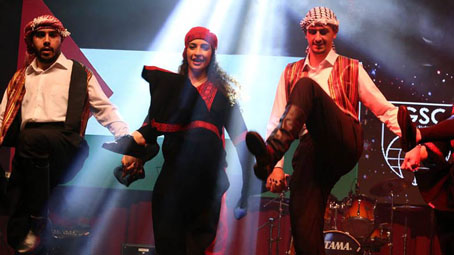 The whirl of the International Evening has yet again filled the Pécs Expo Centre in the spirit of the cultures finding each other. The fact that on 10 March it was the twenty fourth occasion when the international evening was organised illustrates best how deep the roots of international traditions are at the University of Pécs.

The International Evening in the Expo Centre has attracted thousands of students and teachers from the Medical School and the Faculty of Pharmacy, and other participants of a thousand kinds as well.

The International Evening, in the organization of the English-German Student Council, celebrates traditionally the diversity and unity of the students studying here.

Anikó Berta, head of the office of EGSC said that among the 3900 guests filling the centre there were citizens from more than sixty countries present. The introduction of cultures is part of the program, the food and drink tasting had a great success again as well as the stage productions, from the Indian spectacle dance and the choir of the Norwegian students, to the Korean pop hits. Besides the main show in the big hall, in the smaller halls there were an international disco and also a concert program in the organization of the Pécs Music Society, which brings together musicians in Pécs without borders.

The International Evening is the biggest event in the year in the international program but it is not only an opportunity for relaxation. As a charity evening, EGSC supports important local causes from the entrance tickets’ proceeds. They have donated several devices in the past years for education and for the clinical treatment; through procurements worth several million HUF the foreign students help the domestic patients as well.

As the program’s novelty, this year 12 models had been introduced in the evening wearing clothes inspired by their nation’s style; as future doctors and mothers, they represented women’s power of shaping the society. These ladies will also be included in a calendar, which will be published and sold by EGSC for charity purposes.