The rector of the University of Pécs welcomed the four thousandth foreign student, our Faculty’s first-year Japanese student 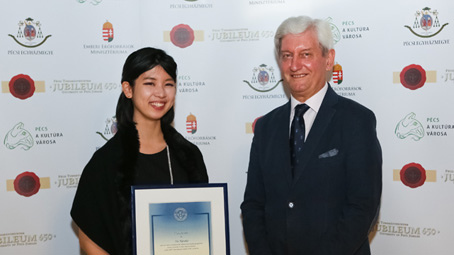 The University of Pécs has more than four thousand foreign students, which is a very important milestone in the history of the institute. The progress is shown well by the fact that in 2010 the number of students coming from abroad had hardly exceeded one thousand five hundred. The four thousandth foreign student, Ide Kanak, the Medical School’s first-year Japanese student was welcomed by József Bódis, rector of the University of Pécs, with a certificate at the Stipendium Hungaricum Gala last Friday.

The leadership of the University of Pécs has set a strategic goal in the beginning of the 2010s, namely to significantly increase the number of foreign students and of course the necessary infrastructure and board of teachers will be developed in accordance with it. Regarding the latter, the Modern Cities Program is a serious help to the university, by means of which the improvements and modernisation were able to receive resources. Currently, more than four thousand foreign students study at Hungary’s first university, which celebrates its foundation’s 650th anniversary this year.

József Bódis, rector of the University of Pécs, has said the following regarding the welcome of the four thousandth student: “The internationalising tendency is best shown by the fact that altogether around a hundred countries’ students study at our university, which is a very high number. It is enough if we just walk through the downtown of Pécs and listen to how many different languages we can hear. Foreign young people enrich the culture of Pécs and create an atmosphere that makes the city and the university unique.”

The four thousandth foreign student came to Pécs from Japan. Ide Kanako has always wanted to be a doctor. “University studies require lots of sacrifices, it is hard to prepare for classes and memorising the vast amount of curricula, but because I would like to assert myself as a doctor in my home, Japan, and other continents, I am very happy that I can study at the University of Pécs and I can acquire the required knowledge for that”, she said.

Mino Rabenjafimanantsoa from Madagascar, student of the Medical School, who has been chosen as the voice of UP this spring, and her band performed at the University of Pécs Stipendium Hungaricum Gala. The international students had an opportunity to learn a Hungarian folk song with the help of the Eszterlánc band and of an outstanding talent from Pécs, Noémi Sturz who is currently a second-year student in the Liszt Academy’s folk singing program.