"Every colleague has tried their best" 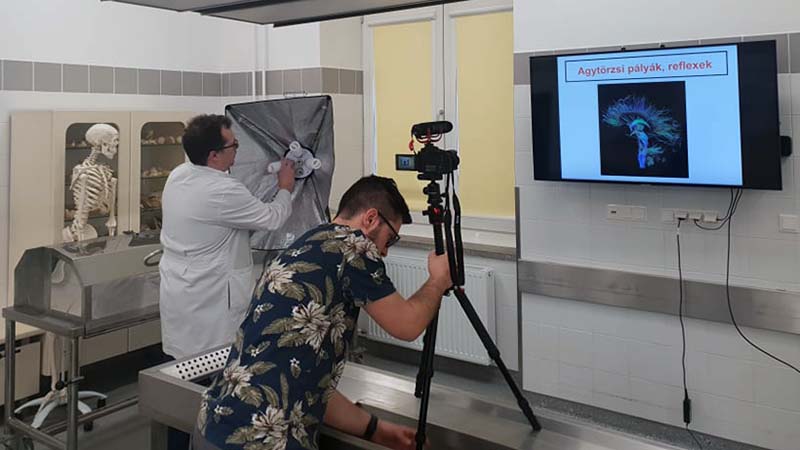 During the extraordinary spring break, the staff of the Department of Anatomy had also been working hard to implement the transition to digital distance education. They used all the means at their disposal to achieve this, with exemplary cooperation. There were people who supervised the recording of the videos, who developed and translated notes, e-learning materials, and others who provided the technical background for the work. Senior lecturer Dr. József Farkas was in the forefront of the latter and is still assisting his colleagues in many ways.

-It took us a day to get over the shock caused by the news that the doors of our institutional system will be closed to the students, and then we started planning the next day. First, we looked at what set of devices we had technically, what we could accomplish based on that, and then we started preparing the learning materials, and recording the lectures after that.

-Have you had digital learning materials before?

-Our digital written and pictorial materials were available mainly in histology on our website, which has been operating successfully for a long time, and we also used these in contact classes. In addition, text notes have previously been compiled by the instructors at the department. One of our most serious digital resources is our zoomable collection of sections, which has been created as a result of the joint work of many of us over the past few years. It became available to our students shortly before the state of emergency has been announced. However, our videos did not exist at all, so we had to figure out what they should look like and where to upload them.

-How was the practical autopsy curriculum recorded?

-This is our “Achilles’ heel” because autopsy is the essence of our practical education. However, I can say that we have successfully completed this task as well. We teach a total of three subjects: anatomy, histology and developmental biology, the latter being part of histology. We were able to publish the lectures and the materials of some seminars related to these in digital form as well, of course with the lack of interactivity and direct contact. Direct work with cadavers is the most difficult to replace, we tried to bridge this gap by using three-dimensional demonstration programs in online classes, and by recording videos and taking photos of properly dissected corpses.

The full autopsy takes place in three semesters. We had previously created a photo material that showed the process layer by layer, and we have now tried to supplement this in a way that besides passive image viewing, our instructors demonstrated step-by-step the most important structures students need to know, adding the most relevant information.

-Publishing may have been a problem here, how did you solve this?

-Of course, we complied with the funerary regulations, but our donors can be seen in the recordings, so we were brainstorming how to make these available to our students. I think we have found a solution that everyone can be satisfied with. We have uploaded the recordings to the university’s Microsoft Teams system, which is only accessible to our students. -Where were the recordings made?

-We have set up our number one autopsy room as a studio, and although we do not have professional filming equipment, we have managed to make quite good quality recordings with the ones we have. Our instructors gave their upcoming lectures one after the other, and we uploaded them to the Internet. Two of us worked mainly on the technical implementation, one of my colleagues recorded and edited the material, and I was responsible for publishing and uploading it. There were also colleagues with us who helped with the recordings.

-Without an audience and interactivity, it must have been difficult to give a lecture for an empty classroom.

-This difficulty was articulated by many colleagues, it was strange to speak without feedback from the students and the metacommunication signs experienced during the lectures. Sometimes our instructors missed something out of what they had to say, or they did not put it exactly the way they wanted to, and therefore they started their lectures over more than once. Later, we smiled at what happened together and we also made bloopers.

-How many hours a day did you work together?

-The first two weeks were tough, we worked for more than 12 hours a day until late in the evenings because we had to record a lot of materials in a short time. We also made recordings in advance, and therefore the situation has eased by now.

-How satisfied are you with your work as instructors and what kind of feedback did you receive from the students about it?

-It is sad that such an event had to take place in order for such teaching materials to be developed, but at the same time the colleagues are satisfied with what has been created. Over time, everyone learned to master the technical steps as well. The teaching of histology may have become even more advantageous in this digital form, as there are more possibilities for drawing, it is easier to show the formulas that we have only been able to illustrate so far if we stood next to the microscope of every student. Positive feedback was also received from the students, who also adapted well to the situation, although they obviously miss personal contact as well.

-How do you, as an anatomist, know so much about technology?

-This is my hobby. I have been working full time at the Department of Anatomy since 2009, before that I participated in TDK. My colleague who dealt with this field before became a resident, this is how I got this role. At first it was bumpy, then I became better at it, and now I saw it as a challenge, and last but not least, it was interesting to try these technical possibilities. In this emergency, it became clear who is capable of what, and every colleague has tried their best.

-Does the collection of digital learning materials continue after the exam period?

-Yes, the summer months will provide an opportunity, in addition to relaxing a bit, to plan further steps.