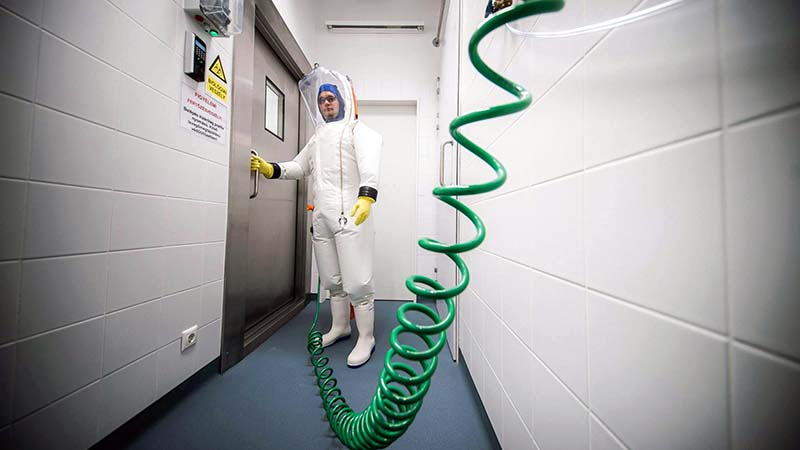 - Why did the colleague of National Geographic contact you?

- The magazine runs a mentor-protegee column with the aim of encouraging young students, high schoolers towards certain professions, professional fields. Last year dr. Zsuzsanna Helyes research doctor, university professor appeared in this column with one of her students. After that we agreed with Tamás Vitray Jr., chief editor of the magazine that we would also get a similar article due to our unique virology lab in the country. Our turn was now, during the pandemic. I had a mentor-protegee interview – with my colleague, dr. Gábor Kemenesi – on how we help the journey of young people, what are their opportunities and there was also a writing about the recent researches of the laboratory. It was altogether 15 pages with two big photos. The Hungarian edition of National Geographic was the first to come up with COVID-related topic and the Americans will also discuss it in June or July. Following a little struggle we achieved to be featured in that issue as well with the photos of our lab and there are negotations about also taking  some part of the writing, but that is not sure yet. It should be noted that the Americans choose one good picture out of ten thousands, so this is a great achievement. Also, further 23 partner countries expressed their interest in the photos and the topic.

- One of the reasons of contacting and featuring you could have probably been the fact that your laboratory and your researches are now well-known in Europe.

- Fortunately that is the case, we have several collaborations with the English, French, Italian. Our laboratory is unique in Central Europe, moreover, it is one of the best in the whole Europe. Regarding the researches we try to achieve results by focusing on three pillars: the first one is to control the epidemic and test the substances against the infection, the second one is the molecular analysis which also gained international recognition, since the first Hungarian sequences and the first European comparison were both accomplished in our lab as well as the first, worldwide cluster analysis. The third pillar is related to the genetic testings. We study the ways the virus alters, where it moves, where it spreads, we research the modifications of its reproductive material and all these might be important for the future drug and vaccine developments.

It is important to note that this is the result of a very serious cooperation between the university and the research centre. I am proud that I managed to recruit a team of international level after our Prime Minister entrusted me with the leading of this research group. The number of our team members is increasing, more and more colleagues are joining us. By now our group became a ramous tree in which we are closely linked with each other. Science is like this, this is the only way we can work efficiently, since research is not a separate activity.

- Has there been a national cooperation in such a level in any other topic before?

- In my field of science sure not, it is unprecedented in the field of virology. Of course there were some colleagues who backed out of the cooperation and did not want to join due to professional  jealousy or other reason, however, I think this attitude is morally harmful for the country.

- How many members does your team have at present?

- How many researchers work only in the Pécs laboratory?

- Fifteen altogether, but only twelve members are part of the core crew. We needed three more colleagues to help with the diagnostics. During the research my colleagues literally rotate in the BSL-4 laboratory. Our core task in the Szentágothai Research Centre would be research, but currently we don’t pursue only that. Since the first of February we test and screen the foreign students, since then do we take actively part in the fight against the epidemic. Since March 16 rural laboratories also have the possibility for diagnosing and since then every preparation is done in our lab. The infectious materials arrive here, the infectious samples are processed here, the reproductive material of the virus is extracted here and is sent to the Department of Laboratory Medicine from here to conduct the real PCR-testing.

Diagnostics and research is very difficult to carry out together, my colleagues are tired beyond words, because they do not have weekends. Patient samples arrive two-three times a day and these have to be processed quickly so that the laboratory can prepare results out of them. Regarding the research activity and the testing of substances there are already more than 400 compounds, which we have to analyse in different concentrations and on repeat, so in fact this means more than a thousand testings. This is a very demanding, long, time- and energy consuming procedure.

I find it interesting that in 2017 when this Level 4 laboratory was established through a GINOP-tender, it got mixed reception. Some of my colleagues did not understand why exactly we would need it here. There were rumors that we would infect the whole town by having a laboratory like this here. Unfortunately life justified the neccessity of our lab within less than three years and it would be a mistake to think this epidemic is the first and also the last.

-What are the tasks of the colleagues in Szeged, Debrecen and the rest of the research group exactly?

- They conduct specifically the researches. The colleagues in Debrecen for example synthetised new chemical compounds for us, which they send here, we analyse and test them, then they alter them and then we test again. Other colleagues test already existing drugs on unbelievably serious computer and mathemathical modeling systems in order to stop the virus. This is the so-called repositioning or rethinking of the already existing medicines. It is a very fashionable field these days, several places have ongoing researches both in America and in Europe. Such promise was for example the hidroxychloroquine, however its relevance has already been questioned. This testing method is simpler, because we do not have to go through the phase 1 and phase 2 experiments, since these are already approved substances that you can find on the shelves of pharmacies. Therefore, it is much easier to use them promptly in examinations and treatments.

- What does your coordinating role mean? How do you spend your days?

- I actually spend very little time at the lab, my job is to see through the research paths and start new ones, monitor them and keep the work together. I have to travel to Budapest a lot, the action group has a meeting every 48 hours with the lead of the Prime Minister and I am present in most of them. I regularly visit the Ministry of Innovation and Technology to conciliate with Minister László Palkovics, since most of the tenders is financed by the Ministry. Of course I also have professional questions ahead of me: where should we go further, what and when can we do.

-Are there enough professionals? How satisfied are you with the current research structure?

- We have enough professionals and I am satisfied with the structure, too, and with everything we achieved so far. We managed to reach really significant results in the last two months. It is enough to just mention the exemplary national unity that formed. Many publications by lead authors and co-authors had already been issued or are currently in progress in relation to our works, which is to be considered exceptionally good.

We recently got the news that the first, 75-year old patient – who received blood plasma therapy at Semmelweis University – is now off the breathing machine.The university and corporate cooperation came into existence in this case as well, since part of the neccessary experiments and examinations were conducted here in Pécs with the joint work of dr. Tímea Berki university professor and our virology team. The patients were treated with the serum after this. It is an incredibly good feeling to know that we saved a patient’s life through our researches. I am also very optimistic about the substance tests, since there are some promising ones. Maybe we will be able come out with a few that can be tested in therapy as well, but not at the moment, rather in the future.

-It is probably still frustrating that you work against time.

- Indeed, since we have to produce results fast and the expectations of us are high. Yet, miracles cannot be expected. I believe that most of our experiments will be useful for prevention or therapy during the second wave of the epidemic. This whole thing is like a war in which we are the soldiers and we have to fight no matter what. No breaks. We hope that the war casualties will be the least possible.