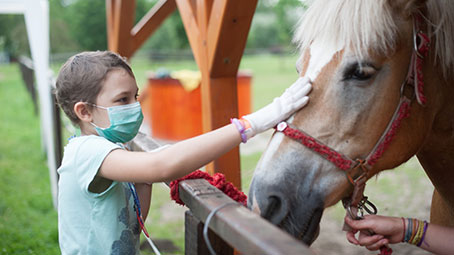 Two students, Réka Izabella Kocsis, who is in her sixth year and Zsófia Sütő, who is a fourth-year student are preparing for a charity run representing the Camp of Courage's Troop of Philanthropists.

The Troop of Philanthropists is the Camp of Courage Foundation's sports community for a charitable cause. The members participate in marathons and half-marathons, as well as long-distance cycle tours and triathlon races. The kilometres they have covered can be adopted either for the price of a coffee or for the price of a movie ticket.

The Camp of Courage is situated next to the city of Hatvan, on the grounds of the previous art camp. The building of the complex was solely based on private donations and serves as a camping site for seriously ill children. The programmes offered here are free for the children and their families. The Camp of Courage Foundation operates as a civil organisation and its events are only supported by charity donations. The camp consists of seven 10-bed apartments, one state-of-the-art medical building, a restaurant with a seating capacity for 150 people, the most modern high-ropeway in Europe, an artificial turf football field, an archery range, a media studio, a riding stable, a lake for rowing, a sports centre and a music therapy room, which
are all in aid of the campers.

The Camp of Courage Foundation was established in 2001 by paediatricians, child psychologists and mental health professionals. Here - with the supervision of specialists - the campers can participate in programmes they would not be able to otherwise due to the state of their health. Because of the fun, liberating experience children gain here, they become more confident in themselves and in their recovery, and are going to confront the everyday hardships and the battle against their illness more bravely.

Beyond the summer camps, they organise family camping and sibling-camps for the families of the sick little ones, which is a great help in recreation and processing the stress and crisis generated by the disease. They have taken part in the following competitions in 2017 with the
Troop of Philanthropists community:

Zsófia Sütő and Réka Izabella Kocsis are preparing to run 21 and 10 kilometres in the autumn race. The foundation has created a profile for them through which the donations come in. The money gathered will be used to facilitate a joy-therapy camping for children with cancer and in a chronic condition.

We would like to support their initiative and make Zsófi and Réka's profiles available here: