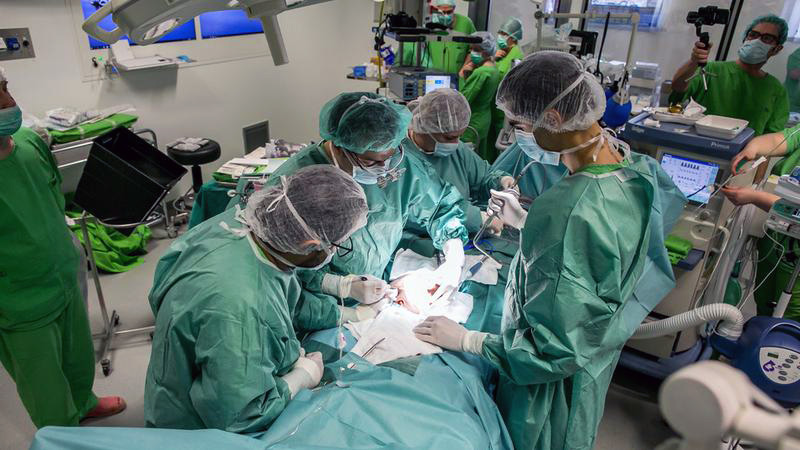 Three Hungarian anaesthesiologists took part in the narcosis of the separation surgery of the Bangladeshi twins: Dr. Marcell Csapody from Budapest, and Dr. Erzsébet Ezer and Dr. Katalin Szenohradszki from the University of Pécs.

A group of more than 10 anaesthesiologists worked together on the world sensation surgery to separate the Bangladeshi twins joined at head. The Hungarian doctors worked with colleagues from Dhaka and occasionally also led the work.

Our colleagues, Dr. Erzsébet Ezer, Head of Unit at the Department of Anaesthesiology and Intensive Therapy, senior clinical doctor, and Dr. Katalin Szenohradszki, senior clinical doctor, worked in the operating room for 36 hours with minimal rest periods. Due to their hard work, the children endured an extremely long surgical process. During the first week of the post-operative period, the Hungarian colleagues stayed with the children around the clock, living in an empty ward of the hospital, to support the work of the Bangladeshi professionals with their experience gained in the neurosurgery intensive care unit.

As it is known, the Hungarian medical team of the Action for the Defenceless People Foundation was invited in 2017 to the separation of the then one-and-a-half-year old Rabeya and Rukaya. The first phase of the Operation Freedom separation surgery series, which is entirely Hungarian in planning and implementation, was the separation of the common cerebral artery by an endovascular method, performed by Dr. István Hudák in 2018 in Dhaka. The second phase was plastic surgery, the implantation and gradual expansion of the special Hungarian-designed tissue expanding implant system took place in Budapest, under the leadership of Dr. Gergely Pataki. This year's final separation in early August was the third phase of the series of surgeries, and the neurosurgery part, the separation of the brains was performed by Dr. András Csókay, neurosurgeon. Currently, the fourth phase of Operation Freedom includes rehabilitation and cranial reconstructive surgery, which belongs to the field of plastic surgery and is under the leadership of Dr. Gergely Pataki.

Dr. Gergely Pataki and Dr. András Csókay, chief physicians of the Action for the Defenceless People Foundation with Dr. Marcell Csapody, anaesthesiologist, returned to Dhaka on 9 September to assess the condition of the Bangladeshi Siamese twins separated during a 33-hour surgery on 1 and 2 August, and to begin the fourth phase of Operation Freedom; the planning and implementation of the rehabilitation and cranial reconstruction.

Congratulations to Dr. Erzsébet Ezer and to Dr. Katalin Szenohradszki!