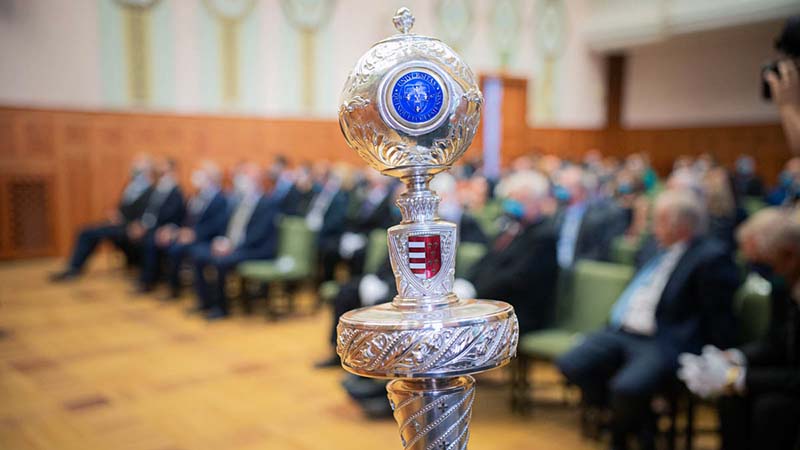 True to tradition, the University of Pécs held its celebratory opening session of the Senate on 1 September in the Halasy-Nagy József Aula.

Due to the coronavirus epidemic, the event took place in front of a reduced number of guests in compliance with increased hygiene regulations, and it was mandatory for those who received an award or recognition to wear a mask and gloves during the ceremony.

“2020 is the year of Covid” - said dr. Attila Miseta, Rector who added that the opening of the academic year will take place twice this year in an unconventional way because the opening ceremony of the National Higher Education Academic Year will also be held in Pécs. He talked about the fact that enrolment has not been completed yet, however, the good news is that the number of international students has already exceeded the number of 5,000. He explained that the investments in the frame of the Modern Cities Program are progressing well, the new wing at the Medical School is 90% ready and will be one of the most modern research units in the country, and the construction of the new dental block is also progressing according to plan.

In the frame of the ceremony, awards and recognitions were also handed over.

Gregor Neumann and Florian Christoph Richter, two graduated students of the UPMS, who, for the first time in the history of the School, obtained the Hungarian B2 level language certificate during their studies, received Certificates of Recognition.

Jason Peter Sparks, doctor and graduated student who was actively involved in the implementation of UPMS enrolment programs during his undergraduate years, was a teacher in high school preparatory camps and has been a UN Youth Ambassador representing Hungary from 2019 received the Award for University Culture. In addition, he also achieved outstanding TDK and OTDK results.

Employees who received the Rector’s Praise:

Based on the proposal of the Medical School

Based on the proposal of the Faculty of Pharmacy

Based on the proposal of the Clinical Center

The rector of the university donated to primary and secondary school teachers, college and university teachers who perform outstanding teaching and educational work and achieve significant results in the field of talent management. Zoltán Karádi, full professor at the Medical School Institute of Physiology, received the Arany Katedra Award.

The Senate of the University of Pécs, on the proposal of the Rector of the University, awards the Nagy Lajos Király Award to a Hungarian or foreign natural person whose scientific, artistic, educational, sports, public or other outstanding achievement has been recognized with a state or international award or prize, or are public authorities and contributed to the development of Hungarian education, science, culture, the increase of the international recognition of Hungarian results or to the development of Hungarian higher education. In 2020, based on the decision of the Senate of the University of Pécs, Miklós Bauer rector emeritus, professor emeritus of the Medical School received the Nagy Lajos Király Award.

Professor Miklós Bauer is a person who established a new school of thought in the field of otolaryngology, he was a clinical director between 1975 and 1994, he is a nationally and internationally known and recognized authority, and a decisive figure in medical education in Pécs. he was appointed Rector of the Medical University of Pécs two times (1985-1991 and 1995-1997).

In addition to his outstanding professional work, dr. Miklós Bauer played a significant role in strengthening the relations between the predecessor institutions before the integration that established the University of Pécs, thus promoting university integration within a few years after his second term as rector.

He received the award in recognition of his dedicated work, with which he contributed to the development of Hungarian higher education, science and culture, as well as to the successes of the University of Pécs and its predecessor, the Medical University of Pécs.