Mino H. Rabenjafimanantsoa, our student at the English Programme is the winner of the Voice of PTE contest 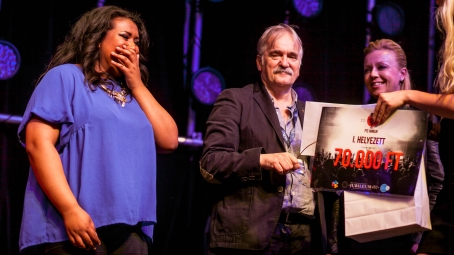 Mino Rabenja, a student of the English Programme at the Medical School has won “The Voice of PTE”, the first music and singing contest of the University of Pécs. The final took place on April 27, 7pm at the E78 hall of the Zsolnay Cultural Quarter.

Mino Rabenja introduces herself as follows:

"My name is Mino Rabenja. I'm originally from Madagascar, but currently live in Norway with my family. I'm a medical student at POTE. I love singing, and I signed up for this competition because I saw it as an opportunity to do what I love while doing my studies."

The show had a total of 48 contestants, 12 of them entering the final, out of which 4 were international students.

“The voice of PTE” is meant to discover the talents at our University and intends to become a tradition. This is fairly justified by the venue jam-packed with audience. Performances were evaluated by a team of professional judges: Tímea Vermes, opera, operetta and musical singer, Tamás Lakner, Liszt-award winning choral conductor, the dean of the PTE Faculty of Arts and Zoltán Beck, founder of the 30Y rock band, musician, guitarist and songwriter, establisher of the University of Music project.

The audience could enjoy outstanding performances from the beginning to the end. Contestants presented songs of different genres, evoking a plethora of feelings.

The judges decided that Mino H. Rabenjafimanantsoa from Madagascar is “The voice of PTE”. After receiving her prize Mino said she feels great here in Pécs and she is really happy that international students get the opportunity to join such programmes. The second place was taken by Inez Iveszics, student of the Faculty of Business and Economics and the third place by Nóra Török, student of the Faculty of Natural Sciences. The best voices get a chance to perform during the summer on the EFOTT Festival, in front of a much larger audience.

We wholeheartedly congratulate to the winner!