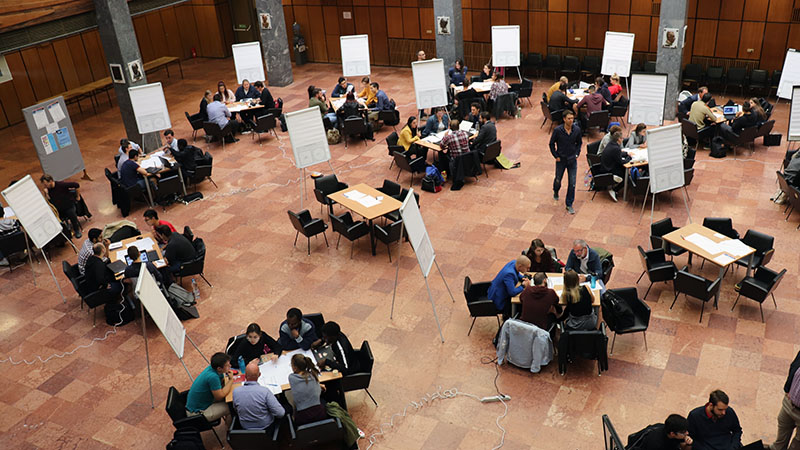 16 teams participated in the PTE Hackathon, co-organized by Simonyi BEDC, the 3D Center, KTTK, the ITD and the Input Program on 20 September. This year's event was also a great success, with the aim of providing participants with an insight into the basics of business development, thereby inspiring them to develop further their own ideas or the ideas created at the hackathon in the Simony Incubation Program later. Several faculties participated this time as well, which provided an opportunity for establishing multidisciplinary teams, thus analysing the emerging ideas from multiple perspectives. Besides the mentors of the PTE and Input programmes, several company experts also assisted the teams in their work. The winner of the exciting competition was the Biowatch team, followed by Stepcash, who have also received the special award of the Pécs-Baranya Chamber of Commerce and Industry. C-Colors finished third. Nanolight received the 3D Center Special Award and the Pharmanager team received the ITD Special Award.

Students of our School were also present at the competition: Szilvia Ulics and Emma Rohr have started their studies in the general medicine programme this year.

- What attracted you to apply for this programme?

R.E.: - During one of our facultative subjects, Innovative Health Technologies, we were informed about this programme, which I liked because it combines many disciplines with medicine. I wondered what mathematical, physical, or even robotic solution to a health problem could be. I am fundamentally attracted to new things and I hoped that through this facultative subject I would be able to discover inventions we barely hear about in everyday life. Such an invention is 3D printing as well.

U.Sz.: - I have heard from senior students that this subject is interesting, and I thought I should take a closer look. Although I would like to work with people in the future, it is important to know how medical science is progressing and I may need to apply the technology properly in the future; that is why I applied for the Hackathon as well.

- How was it to experience that the team consisted of various knowledgeable and experienced people?

R.E.: - It was interesting because there were some of us who had just started university, and others who have been studying here for a long time; it was good to work with more experienced people. There were relatively few general medicine students, but more students came from other faculties, foreign students too. We came from different programmes, and that just helped us in the cooperation because we looked at the same problem from different angles.

- Did this long competition, lasting until 9 p.m., focus on only one problem?

U.Sz.: - Yes, on a medical or medicine-related problem. First, we listed several topics, then picked one and tried to find a solution for that. We were trying to find the answer to how we could solve children’s "white coat syndrome". We approached the problem from both the parents’ and the children's side. The Teddy Maci Hospital served as a model, but we also had to generate income from our idea, therefore we tried to transform this existing initiative so that it has financial value as well. We found the solution in the form of a phone application, which has various packages that the parent can download. In the first one, we designed tales that show the children how a doctor’s visit is conducted. The second one featured a plush animal that included a speaker so it could talk to the children to reassure them. We also designed a mascot for the program, a mouse. We also thought that a small team could visit the crèches and kindergartens in person, helping the little ones relieve their anxieties. A student who has just started studying psychology was a big help to our team, and he gave valuable advice as well. The idea itself came from me; I would like to be part of such a team who visit crèches and kindergartens.

- As a little girl, were you afraid of the doctor?

- No, luckily I was not afraid, but the rest of the team was, and so are many little children today.

R.E.: - For us, the basic theme was raised by our mentor, who is wearing glasses and is disturbed by his glasses when he is lying down or trying to sleep. However, we could not develop this idea any further since there are already contact lenses and laser eye surgery instead of glasses. Then we thought that we could design something that would help the colour-blind or the blind. We were thinking about a special contact lens because there are glasses to solve this problem too.

- How was the presentation in front of the jury?

R.E.: - Each team had a few minutes to present their idea and its implementation steps: how to raise money, the marketing strategy behind it, how to sell it, where it is important to advertise, what is the guarantee of profitability. The jury then bombarded the teams with questions.

U.Sz.: - The jury members walked around the teams during the competition, trying to help and give ideas. The mentors worked with the teams likewise.

- Emma's team finished third - what do you think you could convince the jury with?

R.E.: - I think they liked the presentation, the way it was presented, and they also rewarded us for developing our idea. We came up with a finished plan and managed to convince them that it could really be implemented.

- Did you like this competition so much that you would come next year too?

U.Sz.: - Of course, since it was good to hear the opinions and thoughts of others and to feel that we were creating something good and interesting together.

R.E.: - The different people who participated were great at teamwork and the spirit of this community was very captivating. I am always happy to participate in such events.