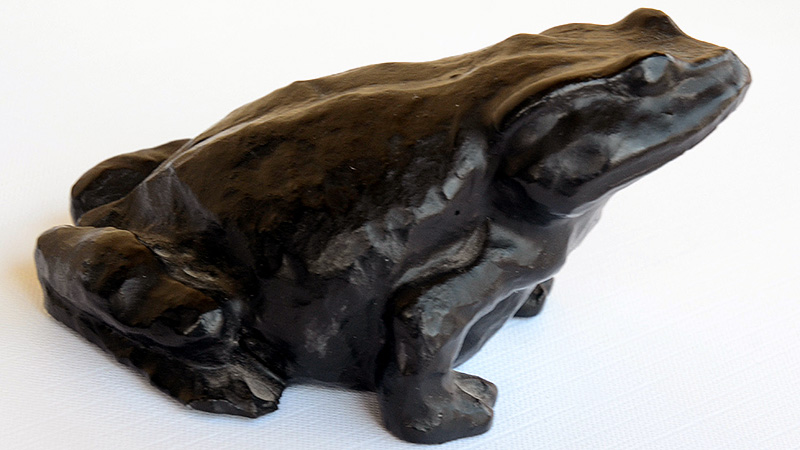 Dr. Lázár, Gyula Levente, professor emeritus at the Department of Anatomy, has recently edited two photobooks, which have been published by a digital photography company. The "Frog Figures" and the "Village houses in Baranya" are integral parts of his creative work, the former elements of which were the books titled "The Pécs Anatomical Collection" and the "Reformed Churches in Baranya". In 1976, Dr. Lázár, Gyula Levente decided to commemorate the protagonists of his scientific work, his suffering experimental subjects, the frogs, by creating a collection of frog figures. For many years, he bought valuable, interesting pieces, and regularly received gifts from his colleagues, acquaintances, and family members as well. When finishing the volume titled "Frog Figures", his collection consisted of 832 numbered copies, but he also has many unnumbered, tiny figures.

The book contains 630 photographs of the frog figures. They are grouped according to their material, including ceramics, wood, minerals and rocks, but we can also find figures made of semiprecious stones and metals. He also wrote explanatory texts for the photos, indicating their type, place of origin, and the name of the donor.

Each piece has a story that the professor tells with passion and excitement. As he says, the diverse, lovely collection was a delight to many people, therefore he decided to introduce them in a book. His two daughters helped him, which is why the volume has special value. The photo material for the book "Village houses in Baranya" is the result of a long photo tour. Dr. Lázár, Gyula Levente photographed the settlements of Baranya, focusing on churches, houses and monuments. The book includes buildings from 121 settlements, according to landscapes. In addition to the photos, the names of the villages, the time of their taking and important, interesting notes are also added, referring to the types of houses, the structure of the settlements and the architectural style marks.

Dr. Lázár, Gyula describes his passion as an expensive hobby, as one of these volumes costs over ten thousand HUF. He intends to give the books as a gift, a unique memory for those who are important to him.

He is currently working on the documentation of the historical collection of the Department of Anatomy, which depicts old instruments, education, writing articles, or the creation of congressional lectures until the beginning of the digital age. He is creating a catalogue of his work with photos and explanations.